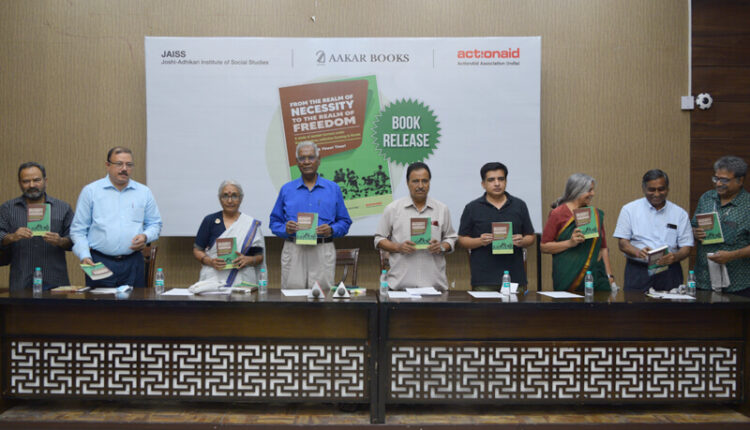 Joshi-Adhikari Institute of Social Studies (JAISS) in collaboration with ActionAid India and Aakar Books organized a book release function and a discussion on the book titled – “From the realm of the necessity to the realm of freedom” written by Jaya Mehta and Vineet Tiwari and published by Aakar Books. The event was held at the Constitution Club on 22nd August 2022.

Jaya Mehta, who heads the Academic and Research Wing of JAISS, and Vineet Tiwari, who is the Coordinator at JAISS, conducted a detailed study of the collective farming programme of women farmers in Kerala under the aegis of the Kudumbashree Mission.

The book is an outcome of the findings of this elaborate study.

T. K. Jose, the first Executive Director of Kudumbashree programme, Kerala highlighted the journey and genesis of the Kudumbashree programme from poverty alleviation to women’s empowerment. He said that a number of government departments converged and explored innovative means to make this programme a success. The book aptly captures the concept of coming together; how the faith and belief in collectiveness were nurtured by these resourceless women over a period of time. He informed that through these small collectives, which are called JLGs (Joint Liability Groups), more than 2 lakh women are now cultivating over 47,000 hectares of land which was mostly otherwise lying fallow. The book can be useful in emulating and imitating such experiments in other parts of the country. 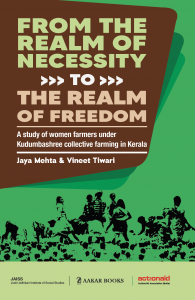 Aruna Roy, the president of the National Federation of Indian Women (NFIW) and the founder of Mazdoor Kisan Shakti Sangathan (MKSS), called this book an excellent reference book, readable book, a set of case studies with lots of information and it will be tremendously useful for a variety of people like government people who like to implement such programmes in other states, rural social activists who have been working with women who are laborers or small landholders and looking at the failure of SHGs in most part of India. The narrative of Kudumbashree demonstrates how the cooperative movement which failed in the rest of India was successful in Kerala. It was possible only because of the participatory democracy and governance complimented with the structural adjustments from people’s perspectives. Kudumbashree is an example of how the local government transferred the ‘illegality’ into a ‘virtue’ and ‘viability’. It is not only a story about an alternative economic activity but rather stories of women with compassion and kindness. In this aspect, the book nicely captures and narrates such stories where women standing at different intersections of gender, class, hierarchy, religion and caste come together to form a collective and define their deals. She also read out two excerpts from the book.

Comrade D. Raja, the general secretary of CPI and former member of Rajya Sabha, emphasized that this book should be read by all the political parties so that they can bring change in the respective areas of their influence. He appreciated the efforts of JAISS and urged them to carry out more research work on critical subjects and bring out more authentic and substantial publications.

Tanveer Kazi, the Associate Director of ActionAid India, said that the strength of the book is its simplicity and the detailed coverage of the whole process, which displays that marginalized people can come together and that cooperative movement is possible. The manner in which the book covers the stories of the last person shows its depth. In this way, the book is full of lessons for policy practitioners. He said that the book should be converted into a module to launch a nationwide movement on cooperatives. It can begin by identifying and mapping the communities that are willing to try alternative programmes.

One of the co-authors, Jaya Mehta said that the canvas of the book is not limited to finding individual solutions and women’s empowerment in the crisis-ridden Indian agrarian scene. The book extends its agenda to find an alternative to the capitalist world characterized by a monopolistic and exploitative market frame leading to extreme concentration of wealth and power. Agriculture is economically non-viable for the majority of farmers and the rural population. The book talks of cooperation and the strength of the collective economic base of the working people, especially the agricultural workers and the small farmers, who, she argues, have the revolutionary potential to change the entire system. The input and the output linkages in the agrarian sector which at present is captured by the corporates and agri-business companies should be reserved for the cooperatives and labor collectives – this can be a way to move away from the exploitative and oppressive system. She remembered late Com. A B Bardhan for his insights as well as the guidance of S P Shukla, the hard work of Dr. S. Radha, and the timely support of Sandeep Chachra. She said that the book points to the revolutionary potential of women living and working in deprivation and poverty. It talks of the active participation of the deprived sections in the political process.

Prof. Ajay Patnaik, the director of JAISS, while chairing the programme said that the cooperative model can address the marginalization in agriculture. The amalgamation of the collectives can wage larger political battles against the corporatization of agriculture.

Vineet Tiwari, the co-author of the book and the coordinator of JAISS, read a poem titled ‘Masses’ by Cesar Vallejo from Peru with which the book ends.

In the end, K K Saxena, the founder of Aakar Books presented the vote of thanks.