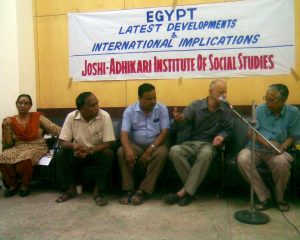 Dr. Qamar Agha, a known expert on West Asian issues, was invited to speak at a gathering organized by JAISS on Egypt. He outlined the historical reasons of today’s situation in Africa and Arab Countries. He discussed in detail about the links between ‘Politics of Oil, Democracy and Terrorism.’ He also emphasized upon the need to intervene in such issues of larger influence and appealed to all democratic and people centric forces to put pressure on Indian government to stop US from attacking Syria. He touched upon various issues including Tunisia, Muslim Brotherhood, Social Networking and many others in this context. Noted journalist Sumit Chakrabothy, Com. Amarjeet Kaur, Prof. Ajay Patnaik, Prof. Subodh Malakar, and many others participated in the discussion.