THE GREATEST COMMITMENT OF A MAN TO HIS CAUSE IS KNOWN BY HIS WILLINGNESS TO DIE FOR IT.

– Heart of the Matter, Graham Greene

A condolence meeting in the memory of martyred Comrade Govind Pansare veteran leader of Communist Party of India, was organized in Delhi on March 10. Comrade Pansare was shot in a dastardly act by some unknown killers on February 16 in Kolhapur, Maharashtra. The memorial meeting, held at Hindi Bhawan, near I.T.O by Joshi Adhikari Institute of Social Studies and All India Students Federation [AISF] was addressed by Dr. Bhalchandra Kango, Secretary, Maharashtra CPI, Praful Bidwai, senior journalist, IIT Professor Ram Puniyani, committed warrior against fascism and communalism and Editor of New Age Shamim Faizi who remembering Comrade Pansare shared their views on the present politics of intolerance and the challenges before the left. 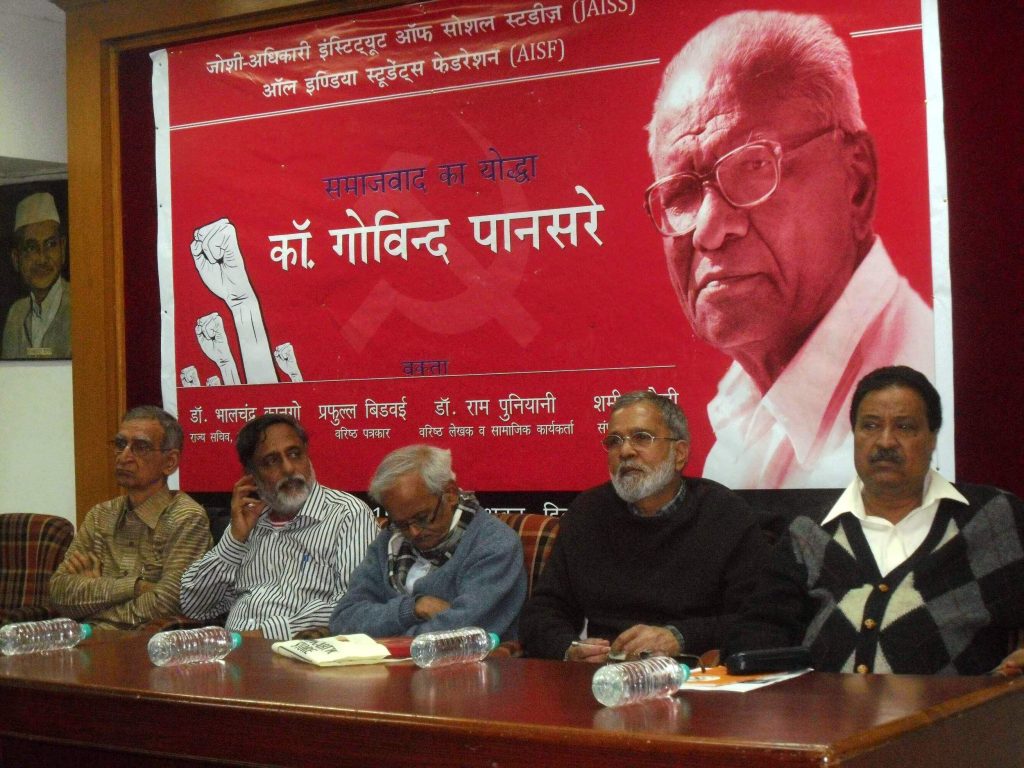 Sharing memories of having worked with him for many years, Dr. Bhalchandra Kango said that Comrade Pansare had not contested even a single election yet he was extremely popular and received the love and adoration of every section and class of the people. He said that Comrade Pansare was always willing to listen and resolve the problems of every section of society. It is important to note that even the Chief Minister of Maharashtra was compelled to publicly admit that it was the reactionary forces that were responsible for the murder of Comrade Pansare and that the system must be made accountable for this cowardly act. Comrade Kango said that Comrade Pansare fought a war of ideology and ideas and that is why he wrote twenty one books the most popular amongst which was the book on the historical hero of Maharashtra ChhatrpatiShivaji. In the book named ‘Who is Shivaji’ he brought out the facts about ChhatrapatiShivaji and challenged the communal image being propagated by the rightist forces and the lies being spread by them in the name of Shivaji and more than one and half lakhs copies of this book have been sold. Sharing many fond memories of Comrade Pansare he said that he was a man without enemies and that his martyrdom has brought together not only the left forces but also the dalits and the tribals. Though Com Pansare was eighty years old physically, to his last day he remain a lively, firey young man.

Paying tribute to Comrade Pansare, Secretary All India Progressive Writers Association read out the condolence messages of Senior Journalist and writer Vishnu Khare and the President of Joshi Adhikari Institute of Social Studies S.P.Shukla. In his message S.P.Shukla said that Com Pansare belonged to the working class; he had associated and learnt from the reformist movements of ShahujiMaharaj before becoming a communist. However he had never forgotten either ShahujiMaharaj or the reformist movement. He said that Com Pansare had always been happy that he been able to stop the appropriation of ShivajiMaharaj by the communal forces and had restored him to the people and the secular masses where he really belonged. Vishnu Khare in his message said Com Pansare had left a deep mark on his heart in the two hours at the condolence meeting held in the memory of Marathi poet and writer Namdeo Dhasal. He said that Com Pansare lived like an unflinching gladiator and died a great martyr. 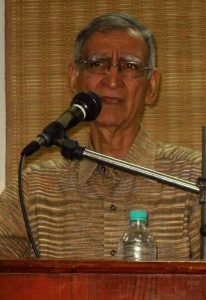 Speaking on the occasion Ram Puniyani said that the rise in religion and increasing casteism was responsible for the murder of Com Pansarewho was very devoted to the aims and the road of his mission. Connecting the murder of NarendraDabolkar in Pune with that of Comrade Pansare he said that both of them were working for creating awareness in Maharashtra and their cowardly murder is a challenge for progressive Maharshtra. He said that his work on Shivaji was remarkable stood as a challenge before the depiction of Shivaji by communal and reactionary forces. Ram Puniyani said that his research work had been a revelation even for people like himself. He said that Com Pansare was the kind of person who could turn even the deep grief of the death of his son to creating something new; he taught us that personal grief should no come in the way of our struggle for social change. In his tribute he added that leaders like Pansare can be killed but they cannot be broken.

Veteran journalist Paful Bidwai said that it was industrialist Ramkrishna Bajaj who gave this idea to Bal Thakarey to build a communal image of Chhatrapati Shivaji and the destroyer image of Lord Shiva to use by the right wing forces. Referring to the martyrdom of trade union leader Krishna Desai in 1970 he said that lakhs of people had collected to mourn him and were full of anger, but the leadership of CPI had asked them to control their anger. He said that CPI had been unable to channelize the anger of the workers and thus provided space to Shiv Sena to spread and strengthen itself. Pansare was like Krishna Desai a leader of many classes. He said that when Com. Pansare had completed 80 years several trade unions and common people had collected funds as a gift for him, but he had said that with these funds he would publish books on hundred such lesser known heroes who were silently fighting the battle of social change for the common man.

Editor of New Age Shamim Faizi had worked for forty years with Com Pansare. In his tribute he said that there has been delay in catching the murdered of Dabolkar but such a delay would not be acceptable in the case of Com. Pansare. He said that the communal jargon being spoken by the government was only an effort to divert the mind of the masses from the real issues of economics and poverty. That is why when a loan of thousands of crores is given to Adaani by the State Bank, Saakshi gives a statement on NathuramGodse; when the question of land acquisition is being raised Mohan Bhagwat comes out with his view on Mother Theresa. He said that the mistake committed at the time of Krishna Desai’s murder shall not be repeated in the case of Comrade Pansare and that the anger of the people shall not be wasted. He said that all progressive, leftist and liberal forces had to come together to challenge the reactionary threat.

At the end of the meeting, Maneesh Shrivastava and other members of IPTA Delhi paid their tribute through the songs ‘Aye Lal Pharere Teri Qasam’ and ‘Ham Sab Is Jahan Me Zindagi ke geet gaye.”

One thought on “Comrade Govind Pansare: This Martyrdom shall Not be Wasted”