On 2 December, Joshi-Adhikari Institute held a meeting on the serious situation that our country is facing, manifest in ascendant communalism and increasing intolerance. More than 80 participants gathered at Ajoy Bhavan to listen to several distinguished speakers who addressed various dimensions of the current political and economic conjuncture and to discuss the challenges that left and progressive forces are faced with in India today.

The meeting was opened by Professor Ajoy Patnaik, who called for one minute of silence in memory of Sam Moyo, who died recently in a road accident in Delhi. Sam Moyo was a leading scholar of agrarian studies and work in this field in the African context. Moyo nurtured close relations with Indian activists and academics, and devoted his life to exploring possible ways of addressing the agrarian crisis that plagues peasantries in the global South. 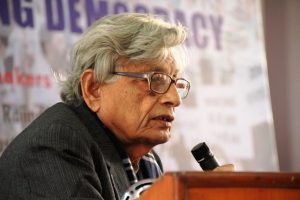 The meeting opened with Professor Irfan Habib’s talk on the abuses of history by Hindutva forces. In a talk that illustrated how the writing of history is a terrain of struggle, Professor Habib criticized the right-wing’s many misappropriations of Indian history and outlined how it’s claims – about our precolonial past, our freedom struggle, and the Emergency of the 1970s – are belied by the actual facts. For example, when the Hindu right-wing attempts to portray itself as having participated actively and integrally in India’s struggle for liberation from colonial rule, it is necessary to point out that the fact of the matter is that the RSS did not lift a finger against the British Raj. Instead, they busied themselves with instigating violence against Muslims and celebrating the murder of Mahatma Gandhi. These facts, he argued, must be put before the public to foster an informed debate that can stem the rising tide of communalism. 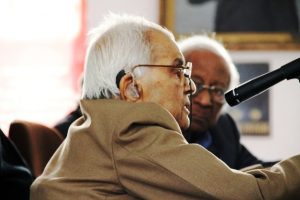 Rajindar Sachar pointed out that secularism and socialism are part of the preamble to India’s constitution. Secularism, he argued, is part of the country’s constitutional backbone and cannot be amended. Similarly, minorities are an integral part of the Indian social fabric, and therefore, current attacks on Muslims negate the meaning of India as a nation. Justice Sachar went on to note that the beef business has 95 per cent Hindus in it. He also quoted Vivekanand and other thinkers right from the period of Shankarcharyya to the latest coffee joint. He argued that it is necessary we should protect the article 73 and 74 as they are the basic poles of our constitution. Rajendar Sachar also discussed the idea of democracy and secularism put forward by various thinkers including Jayprakash Narayan. 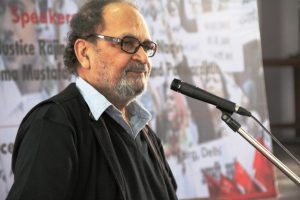 Saeed Naqvi spoke about the role of media as stimulant of communalism. He said that never in India had after freedom to have an independent and free media. Our media always look towards CNN and US corporate media house and dream to become like them. It was CNN which brought the violence of war in your drawing and bedrooms. He narrated many incidents that how a Muslim sufferers when he is labelled with baseless accusations. 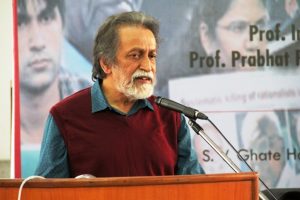 Professor Prabhat Patnaik’s talk concentrated on the economic context of communal fascism, namely neoliberalism and the dynamics of marginalization that it fosters in India today. According to Professor Patnaik, neoliberalism is predicated on a new form of state, which explicitly promotes the interests of corporate capital while simultaneously marginalizing the livelihoods of the country’s working classes. In a democratic context, this creates a challenge for the country’s elites, namely that of building a social constituency which can sustain their power in the electoral arena. The elites of the country, he argued, has responded to this challenge by turning to an agenda of communalism. The left must counter this move by deepening democracy and offering the people an alternative economic strategy. 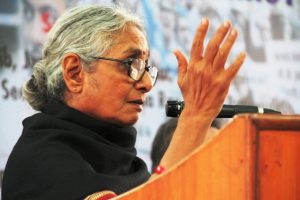 Aruna Roy of the NFIW and Mazdoor Kisan Shakti Sangathan addressed the ground-level challenges that the current rise of communalism and intolerance poses for grassroots movements. Drawing on her extensive experience as an activist in Rajasthan, Ms. Roy spoke of the imperative of rights-based activism in a context where the state is increasingly violating human rights with impunity. Building progressive movements in the current context, she argued, entails a substantial challenge: abstract concepts such as socialism and secularism have to be translated into an idiom and a language that speaks to the lived experiences of the country’s marginalized masses. Progressive movements must reinvigorate and reinvent cultural forms of expression that resonate with the everyday lives of those who find themselves at the losing end of the neoliberal gambit, and left forces, she argued, must develop a new discourse on religion. 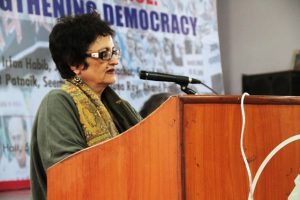 Senior journalist and editor of The Citizen, Seema Mustafa, outlined a detailed anatomy of communal fascism in the present moment. The Hindutva forces who are currently governing the country, she pointed out, have consistently attempted to make national symbols and spaces into Hindu symbols and spaces. They actively target minority communities as well as political and cultural dissidents and turn them into scapegoats and targets of violence. While the BJP government is busy with slashing spending on social welfare programmes, it simultaneously pours increased funds into the coffers of the country’s armed forces and spreads a vitriolic discourse of “teaching lessons” to India’s purported enemies. The obsession with national security is paralleled by a sexism that entrenches patriarchal gender relations, and their control of the mass media goes hand in hand with their protection of corporate interests. 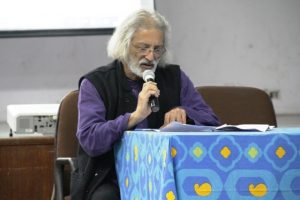 Anand Patwardhan closed the proceedings by reading out his statement on returning the Sahitya Akademi Award and reflecting on both the current attempts by the BJP government and Hindutva forces to communalize the country’s cultural and educational institutions. He also pointed out that the current fightback from persons in cultural and intellectual life is related to the setback for the communal forces in the Bihar state elections, and argued for the necessity of struggling on the cultural front against the onslaught of the Hindutva right-wing. Patwardhan also screened a moving musical film on the recent killing of the leading rationalist thinker Pansare.

The Conclusion of the day’s talk and discussion is clear – in Seema Mustafa’s Words: “The resilience of India as a secular nation is increasingly being felt by those in power.” 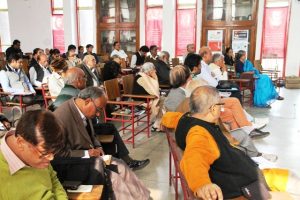 He spoke of the Nehruvian State, which though it promoted the private capital and protected private property, also saw itself as being responsible to some extent for the welfare of the peasant, the small producer and the worker and did intervene to support them. The neo-liberal State on the other hand promotes the corporate financial oligarchy and has withdrawn from the protection of the peasants, workers etc. The result is the impoverishment of the small producer, the small farmer and labourer. As these sections flock to the cities in search of work, along with a section of the urban middle class that also finds itself squeezed by contractualisaton of employment, they form a section that can be co-opted into the communal project. They are made to believe that their enemies are the ‘other’, which means the religious minority, women, trans-genders, ethnic minorities etc. These need to be ‘controlled’, and thus communal fascism is born.

Renowned social activist Aruna Roy spoke of the resistance at the ground level, to the onslaught of an increasingly fascist State. While the rural poor may not understand the jargon in which ideas are often debated, she pointed out that they were fully aware that they were loosing control of their lives. She felt that the resistance had to be based on an ideology, not on the charisma of a leader. But it was essential that ideology be ‘unpacked’ and taken to the people stripped of jargon and theory. No change happens till the people take over a movement. The time has come to take forward the movement by refashioning the discourse and taking it to them. 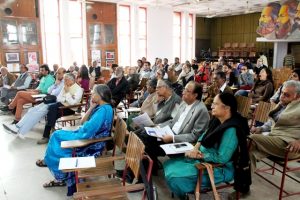 Journalist and activist Seema Mustafa spoke of how in recent months, she felt that all identities were collapsing into one, and that was the religious identity. But the danger she perceived lay in the way this communal consolidation was really an instrument for a creeping fascism overtaking the country. She listed several ways in which fascism was taking shape. The spike in communal incidents of different kinds and degrees, – the most serious of course being the murders of Narendra Dabholkar, Gobind Pansare and Kalburgi, but also the attacks on anyone thought to have killed, transported or eaten cows/beef, the attacks on individuals such as the Vice-President Hamid Ansari, and numerous other cases. Alongside this is the disdain for human rights, rampant sexism and control of women, increasing glorification of military prowess and with it, the continual challenging of the ‘enemy’. All this is accompanied by control of the media, which itself is a sign of the close relationship between the corporate and the political powers.