Anti-POSCO Movement activists were felicitated for their victorious struggle

by Samra Irfan and Aakanksha Baruah

This year marked the birth centenary of Comrade Abani Lahiri and in his honour the Joshi-Adhikari Institute of Social Studies (JAISS) organized a Memorial Meeting on 3-4 December 2017 at Ajoy Bhawan, New Delhi.  This year also brought victory to the fighters of Anti-POSCO movement in Odisha after 12 long years of continuous struggle, and to commemorate the legacy of Comrade Lahiri as well as the legacy of the Anti-POSCO movement, members of this movement were invited.

JAISS Director Prof. Ajay Patnaik delivered the welcome speech and specially extended appreciation to the Anti-POSCO fighters who travelled from Odisha to grace the occasion and share their experiences from the ground.

Remembering Comrade Abani Lahiri, Shri Sumit Chakravarty, Editor, Mainstream Weekly, said that he created a big difference in his 89 years of life. He called him a national revolutionary and provided the audience with a brief glimpse of the glorious history of Comrade Lahiri, touching upon his early beginnings in student politics to his full throttle participation in peasant struggles. Quoting from Com. Abani Lahiri’s books, he said that the tragedy of our freedom movement was that it could not place the peasant question at centre stage, and got influenced solely with the challenges posed by the communal elements. Com. Abani Lahiri spent his youth in organizing students and peasants. His later interviews throw light on the legacy and glory of peasant movement of Tebhaga of which he was also a frontline struggler. 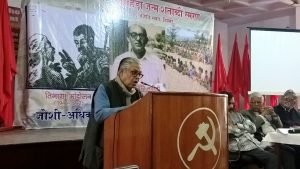 Prof. Manoranjan Mohanty, who was well acquainted with Comrade Lahiri, reminisced about the times spent with him and his contribution in structuring the Tebhaga Movement. He drew attention to the current scenario of peasant struggle and gave an incisive explanation of the shifts in the peasant movement of India. He stated that while during the freedom struggle the peasants had to deal with the imperialists, now that position has been taken up by the neo-liberal market. Through this gap in the history of peasant struggle, the legacy of the Tebhaga movement and those associated with it have been sidelined. He emphasized upon the question of how to bring back the peasant struggle to center stage in order to overthrow the ruling industrialists. This, he said, is how the legacy of Abani Lahiri could be upheld.

While addressing the gathering Prof. K.B. Saxena emphasized that for the people across time and space, land has been not only an important source of livelihood but it is also a source that provides identity and security to the people. Stating this as the reason for the countlesssland struggles that marked our history, Prof. Saxena presented a historical background to these struggles. He also highlighted how the nature of these land struggles has changed over time. With the introduction to the alien land reforms, large portion of land were shifted to non-tribals and these land reforms and land records became the basis for the land struggle. However, after 1990s, land too became a marketable commodity. Big infrastructure was developed on the fertile land of the farmers, as the resources of the government expanded and alongside,‘development’ projects grew in number. Land acquisition thus was the base for all land struggles, since then.

Apprising the participants about the Land Acquisition Act, 1894, he said since the Act was formulated by the British, it was tilted towards the state. It did not provide the people with rehabilitation or compensation based on market price. Subsequently, amendments were made in the Act and rehabilitation policy was included in the Draft Bill proposed in 2007. However, further suggestions and recommendations were made tothe Draft Bill of 2007 which were later incorporated in a new bill that came in 2009. He added that both Bills lapsed as theywere not passed in the parliament. After a long process the amended law on Land Acquisition, Rehabilitation and Resettlement Act came in 2013. The law provided for compensation as well as proper rehabilitation of the displaced population. However, in 2014 the law was reversed and through anordinance the government was permitted to exempt projects in certain categories. The status as of now is that, since land falls under concurrent list, the state governments, based on suggestions made by the NDA government are to propose further amendments.

In this light, Prof. Saxena appreciated and congratulated Comrade Abhay Sahoo and his team for leading the Anti-POSCO movement and for its victory. The movement is very inspiring as despite all the efforts and means made by the state to oppress the people, the people remained united and continued the struggle peacefully. Prof. Saxena asserted that the struggle is not over because the people have not got their land back. The movement needs to continue with the same intensity and same unity for the rights of the people. 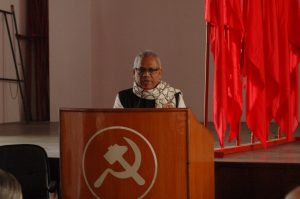 Comrade Abhay Sahoo raised important questions while sharing his experience of the Anti POSCO movement. He stressed that the movement was not against industrialization or development but at the same time it is important to be conscious about the fact that there is a huge cost at which development is taking place. He added that the proposed land for the POSCO project is fertile land where the peasants grow betel vine. Further, the loss of land to the industry does not only result in the extinction of this rare cultivation but also renders a large number of people, both young and old, unemployed. The struggle therefore became broad-based and people from sections of the society came out in support. He remembered Com. A. B. Bardhan who came to the area of struggle six times and inspired the activists by his unflinching support.

Comrade Manorama, a key participant in the women’s fight against POSCO, and state secretary of National Federation of Indian Women (NFIW), gave a glimpse into the life of struggle that she witnessed in the past 12 years. She stated that it was a conscious strategized action of putting the children and women at the forefront of the fighting lines against the police. The people of the land guarded the entire area and put up gates around it. She also stated that the protesters were under constant attack – were arrested, had numerous cases filed against them, were victims of bomb blasts and bearers of grief upon the death of fellow protesters. She further condemned the government for being cause of their distress.

Comrade Bijay Panda raised important question of “What Next?” He said that in today’s political environment one should think of people’s front where all pro-people struggling forces can come together. While appreciating Odisha activists for their victory, he said that struggle is not yet over, therefore, we should be careful about the designs of the capitalists and the government. Another researcher cum activist from Odisha, Com. Sandeep Patnaik, discussed the findings of the study of POSCO connections. He talked about strategy of sending appeals to Korean Trade Union Leaders and United Nations.He described in detail how they traced the stakeholders of POSCO Company and reached out tothem in order to convince them that POSCO is violating human rights in India. All these efforts along with the continuous struggle of local people resulted in withdrawal of POSCO from Odisha.

The two-day meeting saw a fruitful discussion over the wider question of the land and the rights associated with it. Comrade Vineet Tiwari showcased a beautiful collection by the artists Shri Chittaprosad and Shri Somnath Hore and photographer Shri Sunil Janah, who captured the struggle visually. The meeting also tried to engage a dialogue between the rural poor displaced community and the urban poor of the Kathputli Colony who are going through a similar phase. Some twenty five women and men with kids, came to attend this meeting on the second day with senior Comrade Philomina. Explaining the reason for coming late they said that the Delhi Municipal Corporation’s bulldozers and police force reached the Kathputli colony again, the place where they came from.  Com. Rushda of NFIW made a presentation on how the people who are folk artists and who were living there for more than 60-70 years were displaced by the government just to acquire the land for the private property developer Rahejas. Local residents also shared the dark memories of repression which they faced by the police and the administration, when, violating all laws and suppressing all civil rights their houses were bulldozed and protesting NFIW leaders Com. Annie Raja, Com. Philomina and many other local residents were brutally beaten with sticks and boots. 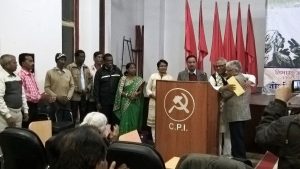 This was an emotional moment and anti-POSCO struggle comrades expressed their solidarity. Prof. Mohanty and everybody else said that, “We shall fight, we shall win”. Former member of Planning commission and President of JAISS, Shri S. P. Shukla pinpointed the question of the land and the politics associated with this. Paying homage to Com. Abani Lahiri he said that one should not forget the class division within agriculture sector. There is a difference between a farmer and a peasant. Egalitarian forces should keep peasants in the centre stage of their struggle while carrying together the comparatively deprived sections of the farmers. He saidthat land has always been a tool of gaining power over vast section of the people who are dependent on it for their survival. In this situation, poor peasants can come together in the form of cooperatives and galvanise their scattered strength by coming together. For such thing to happen, he said, we must work with an inclusive and radical politics.

On this occasion, a gesture of solidaritywas made by gifting Anti-POSCO struggle Committee a cheque of small amount of Rs. 25000. While presenting the cheque to Com. Abhay Sahoo and his colleagues, S. P. Shukla said that we ourselves feel honoured in honouring the fighters of this just cause.

Dr. Jaya Mehta thanked the audience and the guest speakers.