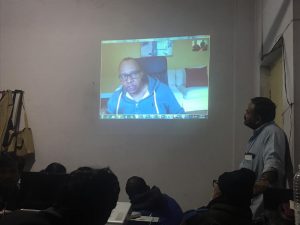 The first question was on the nature of the Trump presidency in its two years. To this, Dr. Monteiro replied that we are in the midst of the greatest political crisis in the history of the United States. The deep state in America is attacking the president and the presidency. Trump’s decision to withdraw troops from Syria and Afghanistan was seen as a threat to the military hegemony of the United States around the world. The secretary of defense immediately resigned and we have heard talks of impeachment by many in the establishment, including talks of a coup-d’etat. Trump has not backed down from his position that he wants to see a multi-polar world. He talks about detente and peaceful co-existence.

The next question was on the nature of the Mueller investigation and whether his actions would be seen as a betrayal of the nation. To this, Dr. Monteiro replied that it is a fundamental betrayal of the ruling class. The Mueller report, investigating whether Russians are collaborating with Trump. They have found people around him, but they have found nothing on him. The Mueller commission is being forced to come out with a report. It is difficult to understand this from afar, but the American working class is in a state of rebellion. There is a deep crisis.

People asked if Trump was really serious about fulfilling the promises he had made. Dr. Monteiro replied that the time was one of systemic crisis and imperial retreat. We cannot talk in abstraction and must talk real politics. He said that he had argued that Trump is the most pro-peace president since John F Kennedy. He said that the American presidency was by nature reactionary. However, Trump was objectively working in favour of peace. As part of this, he talked about Korea and how important the peace process there was. He also said the reaction of the ruling elite was extremely negative. 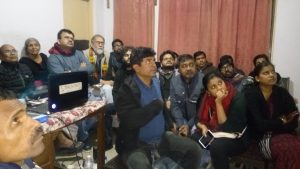 Another question was asked on immigration and refugees, and Trump’s treatment of them. Dr. Monteiro said the question of immigration and refugees is a political as well as an economic question. The open borders policy was supported by Ronald Reagen. The labor movement was opposed to this. The neoliberal global order attacked labour in all countries. What this did was to establish a labour source in a country like the United States. This has had a tremendous impact on the labour movement. Capitalists would hire cheap undocumented labour who would not be unionized. Black workers tended to be at the lowest place and have suffered immensely. It is estimated that by 2026, black male workers without a high school diploma, 60% will not have a job. This would not have happened had there been some control over borders.

A question was asked on who the support base of Trump was. There is a claim that Trump is a fascist. To this Dr. Monteiro said that that the Trump victory was a result of the white working and lower middle classes. Moreover, many black workers did not turn out to vote which was  like a vote against the Democratic party. He also said that there was a cartoon version of American politics which saw Hillary as the liberal and Bernie as the left. Bernie Sanders is a social imperialist. He said that the fascists do not have to run for office, they control the military and other higher levels of administration in the United States. As an example, the United States has 6% of the world population but 25% of the world prison population. Therefore, this idea that Trump is bringing fascism is wrong. He pointed to an article in Foreign affairs by Richard Haas who argues that the American empire is in collapse. The real issue is the disintegration of the American empire.

A question was asked on the status of Cuba and Venezuela, and American imperial ambitions in that region. To this Dr. Monteiro clarified that when he said imperial retreat, he did not mean wholesale imperial retreat. However, Trump was changing the geo-strategic map. Particularly in the middle east and Afghanistan, and by attacking NATO, Trump is attacking the U.S. imperialist empire. We cannot underestimate his position on Syria and Afghanistan. He also said he wants to cut the military budget.

People expressed skepticism about whether Trump really cared for the American populace or whether he just wanted to retain power and take populist measures. To this, Dr. Monteiro said he would not disagree with the skepticism. However, he said there was a need to understand what was going on and particularly to understand the political crisis. He said that he thought Trump did want to improve the condition of people in the US. However, the real issue is the crisis of U.S. imperialism. 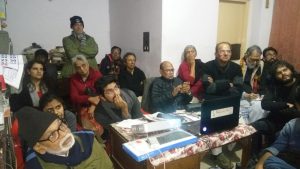 There was a question on the Kashoggi murder. To this, Dr. Monteiro said Trump was not prepared to point the finger at the crown prince. He said there was a time when Saudi Arabia was prepared for the privatization of Aramco, the Saudi nationalized oil corporation. The crown prince and Saudi ruling elites had agreed. It would have been one of the most highly valued opening stocks on the new york stock exchange. Aramco is the basis of the Saudi economy and its privatization would have meant the imposition of deep austerity. He said he thinks when the Saudi crown prince drew back from Aramco, some sections of the American ruling elite turned against him. He said we all know that Saudi Arabia has been an American ally and their human rights abuses have never bothered the American elites before. Hence, the Kashoggi case was not actually about what was being said at the surface.

There was a question on what Trump has been able to do for the American working class, and whether he would be able to get radical social change in America. Dr. Monteiro said he had done very little for the American working class and that has partly been because it has been impossible for him to govern. He said that to turn around America is very difficult. All of the institutions serve a tiny oligarchy. To bring about radical social change is a long drawn out process.

There was a question on the crisis in the agricultural sector of the economy. Dr. Monteiro said there was a crisis and it was connected to the neoliberal global order. There was a question on whether finance capital was completely dominant or there was also industrial capital in America. To this Dr. Monteiro said that finance capital has taken over completely. He said capital is extremely powerful, for example general motors announced that it is closing off 8 plants. He said to achieve any change in America is very difficult.

There was a question on Venezuela and Maduro and America’s policy on Venezuela. Dr. Monteiro said that the US state has waged war against them since the election of Hugo Chavez and has intensified it against Maduro. In spite of difficulties, Russia has announced that it will give $6 billion to Venezuela. Two Russian jets flew from Russia to Venezuela. The Maduro regime has defeated the counter revolutionary forces. It has support from Russia. China may be generous as well. The price of oil is going down. However, right now there does not seem to be a threat of overthrow.

Finally, there was a question on the recent G-20 meeting, and a report in the economist that Trump’s policies would mean economic doom. Dr. Monteiro said that the economist was suspect. However, he wanted to clarify that he did not see Trump as a revolutionary. Instead, he said that Trump represents a profound crisis of the American system. He said that without a mass movement, there cannot be a radical change in the system. However, in terms of the global situation, there is imperial retreat and movement towards peaceful co-existence. The US is in a state of political crisis that is profound. The deep state has come out and exposed itself. He said this created space for mass political movements, and left movements in particular but to utilize this space they would have to understand the nature of this crisis and the Trump presidency.

THE CRISIS OF AMERICAN EMPIRE AND THE PRESEDENCY OF DONALD TRUMP